← more from
URBNET
Get fresh music recommendations delivered to your inbox every Friday.
We've updated our Terms of Use. You can review the changes here. 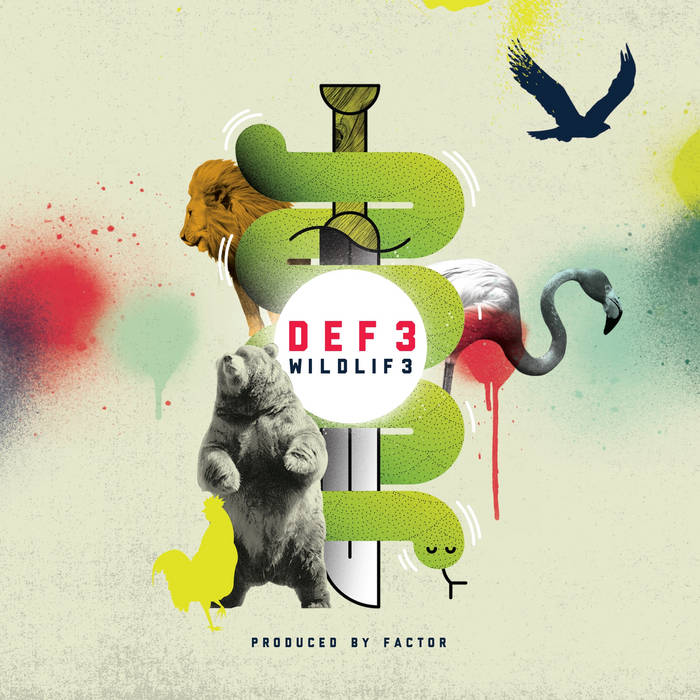 How Regina’s Def3 helped establish hip hop in Saskatchewan
I have wanted to write about Def3 for some time. I’ve always admired his music, as well as his relentless championing of Saskatchewan. Instead of leaving town for Toronto or New York or Los Angeles, he stuck around and helped carve out a hip hop scene in the province. His latest album, a collaboration with Saskatoon producer Factor, was in many ways an excuse to do this story; what I really wanted to talk about was the evolution of hip hop in Saskatchewan. That’s what we did.... (follow link for full story)
~~ AJM | verbnews.com/issues/s323/feature.php

"His latest with Factor, Wildlif3, reflects that shifting identity and Def 3’s obvious confidence. Fernandes coasts from breezy, synth-heavy party rap (“Babyface” and the title track) to vaguely futuristic boom-bap (“So Far”, “Under the Influence”) to the soulful tracks bookending the record, bringing to mind something like the Windy City’s young buck mixtape superstar, Chance the Rapper. Some of it works — the stretch from “So Far” through the Blade Runner-sounding “Live It Up” is banging, and not just because of Toronto MC Shad’s blowup guest verse on “The Truth” — and, well, some of it falls flat.

But that’s to be expected of an artist with a decade-old body of work who still makes experimenting with his sound feel comfortable. Even his missteps are better than hearing a dude grind out the same shit for a decade in a scene as vibrant and volatile as hip hop. “Life’s a beach,” Fernandes raps on “Babyface”, “so I try to keep the sand out my suit.” Funny that it comes in one of the lighter tracks on the record. Nothing Def 3 says on Wildlif3 carries more weight as an ethos."
~~ John Cameron | prairiedogmag.com/2014-06-26/def-3s-rap-lab/


"Def 3 has spent the past 2.5 years sharpening up his skills on stage and in the studio touring extensively with Vancouver's Sweatshop Union throughout Canada and the U.S He is currently promoting his latest EP entitled "Amnesia". The EP features Moka Only, Josh Martinez, Tonye Aganabe and Ra Focus. His newest album with Saskatoon native super producer Factor is entitled “WILDLIF3” and is set to be released Summer 2014 on URBNET Records. Expect to hear a lot more from Def3 in the next few years as he is just getting started."
~~ URBNET

A world traveler by the age of 4, Def 3 lived for six years on board a hospital ship with his family. His preteen years were spent traveling to 27 countries with his parents and brother from the Caribbean throughout Europe and West Africa giving Def3 a unique perspective on life. From musical parents with Latin rhythm from his Chilean father, Ramon, and a flair for words from his mother it was only natural that he would produce his own brand of music.

He began performing at the age of six in a song and dance group called Ships Kids, entertaining hundreds of people in some of the world’s poorest nations where Mercy Ships offered free surgeries and medical help. Spending most of the year docked in a developing nation and the rest in Europe moving from country to country Def 3 developed an appreciation for diverse cultures.

After a year in East Texas his family moved to Regina where Danny became Def 3 and began making waves of a different sort. He has been a major contributor to the Saskatchewan arts scene not only through his work as an established MC, but also as a professional Spray Paint Artist and highly active DJ. Boasting well over 500 career shows it makes sense that he is often recognized for the strength and consistency of his live performance. With more then 100 International shows in the latter part of his career alone, he has gained international notoriety through his highly active touring schedule performing official showcases at major festivals such as Midem, Project Pabst, SXSW, Shambhala, Juno Fest, Pop Montreal, NXNE, CMW, Breakout west, Prairie Scene, even headlining the Saskatchewan pavilion for the opening ceremonies at the 2010 Vancouver Winter Olympics. By special invitation he even performed at private galas for the Governor General of Canada, Her Excellency, Michaelle Jean, and the Lieutenant Governor of Canada during their Saskatchewan visits.

In June 2014 he released his album ​WILDLIF3 ​with Saskatoon super-producer Factor to critical acclaim, receiving the award for ‘Rap Recording of The Year’ at the 2015 Western Canadian Music Awards. In its first week of sales, ​WILDLIF3, ​climbed to number 6 overall for best selling albums on the iTunes Canada hip-hop charts and reached #1 overall in Canada on Earshot Magazines’ college radio hip-hop charts and was in the top 10 charts for 23 weeks straight. ​WILDLIF3 ​then peaked at #8 overall on the CMJ US College hip hop charts. Def3 has also landed 6 videos on rotation on Much Music’s Much Vibe and Rapcity including two of his 4 videos from the Wildlif3 release for “So Far” and “Wildlif3”.

Music aside Def3 is also a well-established visual artist who has produced numerous murals around the globe and contributed to several respected art shows across the country. On top of that he is also known for his work within the community. He has organized, and led instructional workshops to all ages of youth and a wide variety of students working with inner city youth programs, partnerships with the Regina Board of education, and even Graduate classes at the IMP labs through the University of Regina in Saskatchewan.

Danny Fernandez is Def3, a well-established hip-hop artist based out of Regina, Saskatchewan, whose unique journey has helped pen an engaging narrative, and curate an eclectic sound.Spending the better part of his youth travelling the world via hospital ship, shaped Def3’s productive outlook and wealth of creativity. ... more

Bandcamp Daily  your guide to the world of Bandcamp